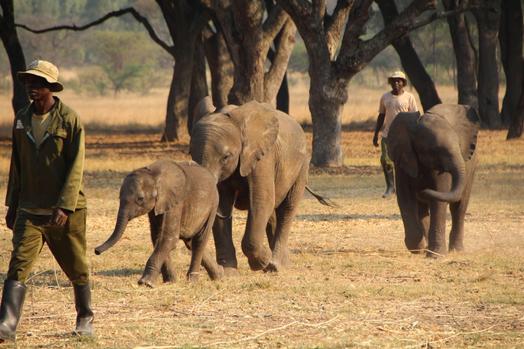 The Rise of the Matriarch expedition saw an all-women team of eco-warriors visiting women-headed  conservation initiatives in four countries. One of the highlights for the team was interacting with rescued elephants at the Wild Is Life sanctuary in Harare, Zimbabwe.

Botswana’s parliament recently passed a motion considering lifting the ban on elephant trophy hunting, citing an increase in both the elephant population and human-elephant conflict (HEC) as their motives.

In the ensuing debate, unsubstantiated facts and figures concerning Botswana’s elephant population are used to support the hunting agenda. Many of these statistics have no scientific basis, so let’s debunk some of those figures.

What is the true size of Botswana’s elephant population?

Over the last few months, politicians have quoted the Botswana elephant population as large as 237,000.

However the African Elephant Status Report (AESR) estimates Botswana’s elephant population to be 131,626 individuals migrating across an area of 228,073 square kilometres. The vast majority of these elephants occur in the northern region that includes Chobe, Moremi, and the Okavango Delta.

This makes Botswana’s elephant population the single largest in Africa, supporting approximately 30% of the continent’s entire wild population, which is believed to be in the order of 415,000.

One of the reasons why there is disagreement over Botswana’s elephant population size is the fact that these animals form part of one large freely migrating population of an estimated 216,000 individuals. These animals regularly cross borders between Angola, Botswana, Namibia, Zambia and Zimbabwe, moving within an area of 440,000 square kilometres called the Kavango-Zambezi Transfrontier Conservation Area (KAZA TFCA).

According to the African Elephant Specialist Group, a coordinated cross-border survey would be the only way to get more precise population numbers. Until then, Botswana’s approximate 130,000 elephants is our best estimate.

The African Elephant Specialist Group of the IUCN Species Survival Commission (SSC) produced the AESR in 2016 and is considered the most up-to-date and comprehensive document on the status of the African elephant in the wild across its entire range.

The perceived ever-increasing elephant population is a driver for reconsidering the hunting ban, but is the population growing?

According to AESR, Botswana’s elephant population actually declined by 15% in the preceding 10 years. This decrease is not as dramatic as across most of Africa and is testimony to the country’s solid conservation policies.

Over the last decade, losses of at least 110,000 elephants or 30% of its entire population have been reported across the African continent.

The cause of this decline is mostly due to the poaching crisis, triggered by the demand for ivory in East Asia. Although Tanzania suffered the largest losses (60%), poaching has also severely affected populations in Southern Africa, especially in Zimbabwe, Angola and Mozambique.

How many elephants is too many?

This is the million-dollar question, to which end the carrying capacity of elephants is often seen as a magic number that an area can support without detrimental ecological change.

Politicians often quote a carrying capacity for Botswana of 50,000 elephants (i.e. 0.2 elephants per km2) and even claim there are 7-8 times too many elephants.

“There is no scientific basis for the declaration that 50,000 elephants is the “correct” number for Botswana; it is an arbitrary figure”, says Keith Lindsay, conservation biologist working with the Amboseli Trust for Elephants.

A carrying capacity of around 0.4 elephants per km squared is widely used. Botswana with a range area of up to 260,000 km squared in wet season and its current 130,000 elephants therefore falls more or less within this “acceptable” range.

However, “the application of the term carrying capacity for elephants in Botswana – or indeed anywhere else – is a carry-over from commercial livestock farming that has no real meaning in highly variable African ecosystems”, Lindsay continues.

This much quoted carrying capacity of 0.4 elephants per square km comes from an outdated “Hwange Game Reserve management policy that had no scientific basis”, says Ian McDonald (lecturer in wildlife management).

There is an unsubstantiated perception in Botswana that HEC is on the increase and the eastern Okavango Panhandle is often used to illustrate this point.

This is an area where approximately 16,000 people share living space with 11,000 elephants. Yet studies conducted in this area show that, even though elephants cause damage, they are seen as an intrinsic part of Botswana’s natural heritage.

Studies have also shown that elephant and human population densities are not significant drivers of HEC, but rather land-use and competition for resources.

There is unfortunately no one-size fits all solution for complex situations involving people, wildlife and economics. All these statistics for example do not provide a solution for HEC, which is very real for the people competing on a daily basis for water, food and space with Botswana’s large population of free-roaming elephants.

Hunting quotas as a management tool

Over the 10 years prior to the hunting ban in 2014, Botswana’s CITES annual export quota was between 420 and 800 elephants. This resulted in an average of 341 import and 321 export CITES permits issued annually.

Hunting quotas of these levels would have little to no impact on the elephant population size and trophy hunting therefore cannot be considered an effective management tool.

Lindsay adds, “trophy hunting cannot or should not have much effect on local elephant densities, otherwise the trophy-sized animals will not be there for the hunters to shoot. So, it [trophy hunting]does not have any direct effect on reducing HEC”.

Some of the widely accepted and necessary interventions to reduce HEC include education and awareness around elephants, understanding and identifying elephant migration corridors, rapid response to HEC, allocation of agricultural plots in appropriate areas, and promotion of eco-tourism ventures.

It is important to note that Botswana should not need to carry the burden of this large but vital elephant population on its own. Neighbouring range states should be part of the long-term solutions with trans-frontier protection and connectivity of ecosystems, to allow the continued natural dispersal of herds within KAZA TFCA.