You are at:Home»Media Articles»Elephant corridors essential for the species and environment

Madikwe Game Reserve is becoming congested and a 75-kilometre corridor is the solution – if only bureaucracy can get out of the way.

Whenever a reserve finds it has too many elephants, the truth is that it has too many fences. Elephants are natural migrants. For millions of years, when conditions became unfavourable they moved. When they can’t, they hammer the environment.

It’s a problem North-West Province’s exclusive 75,000 hectare Madikwe Game Reserve has right now. Its herd has recently swelled to over 1,200 at a time of severe drought and the vegetation is in trouble.

“It’s not yet at the stage where we need to start thinking about something drastic like culling,” says z, Head of Ecological Services for North-West Parks Board, “but it could definitely do with fewer elephants.”

In the past, the standard solution was to cull or translocate, but the first has become socially unacceptable and the second hugely expensive. And, as Nel points out, there are few conservation areas in South Africa that could safely and sustainably accommodate more elephants.

According to Dr Marion Garai, chair of the Elephant Specialist Advisory Group, the only way to go for smaller reserves like Madikwe is to open corridors that follow ancient elephant migratory routes. 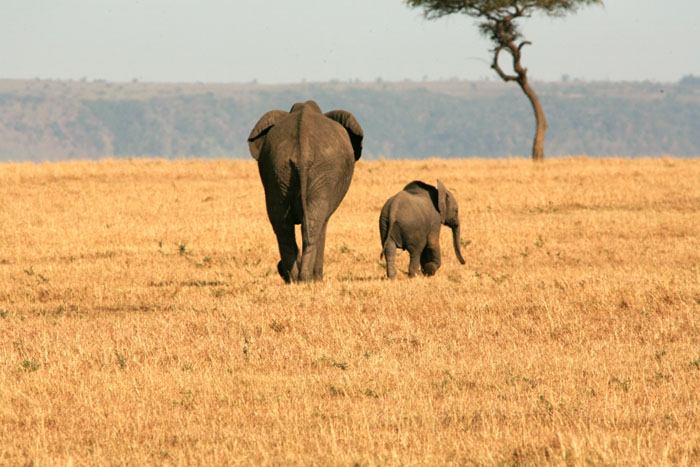 “Corridors have huge benefits because wildlife can move to different vegetation areas,” she says. “They can open summer/winter areas and relieve overgrazed vegetation and allow it to recover. It’s the most natural pattern for elephants.”

According to Digs Pascoe of Space for Elephants, corridors also help elephants to spread their gene pool and share knowledge between different groups.

A conservation corridor linking Madikwe and Pilanesberg National Park, roughly 75km away as the crow flies, has been in the pipeline for almost 15 years. It would remove internal fences and allow elephants to move freely between the two parks, extending the entire conservation area to around 300,000 hectares. Pilanesberg presently has only 240 elephants.

This corridor would form part of the Segarona Heritage Experience, an Open Africa eco-tourism route that was launched in 2012 and incorporates the Bakgatla tribal lands, the towns of Derdepoort, Zeerust and Groot Marico and a number of cultural and heritage attractions.

However, conflicting interests with local mining companies including Platmin, a loss of faith from subsistence farming communities within the proposed corridor and insufficient commitment from local government and other stakeholders has hampered the project. According to Nel, this may lead to it being abandoned.

Garai remains optimistic. “You can’t just move people and villages for a corridor between Madikwe and Pilanesberg. But there are areas with very few people, rural communities who would be willing to participate, areas which belong to provincial government and willing landowners who could be incorporated.”

Corridors can boost tourism, create jobs and a sense of local resource ownership and play a role in curbing poaching. “That way tourists can win, locals can win and wildlife can win,” says Garai.

iSimangaliso Wetland Park, South Africa’s first World Heritage Site, is proof of the value of a corridor system. It comprises 332,00 hectares which link three major lake systems and eight different ecosystems. It has been widely recognised for its pioneering conservation vision, the empowerment of local communities and the value of corridors.

According to iSimangaliso CEO Andrew Zaloumis, the early strategy was to recognise that eco-systems know no boundaries and that many species within the region cannot be controlled by fences. His big dream is to allow historically-occurring game to migrate from the Lebombo Mountains in Swaziland and Mozambique all the way to the KwaZulu-Natal coast. It’s almost a reality.

In North-West Province, however, extending a Madikwe-Pilanesberg corridor into Botswana to the north-west and into Limpopo to the north-east seems an increasingly distant dream. And Madikwe’s elephant population continues to grow.

Beyond the problem of blocked migration, says Nel, is that there are no natural constraints on elephant population growth in the reserve, “there are waterholes everywhere, and the water is completely out of sync with the available grazing.” He adds that its population has grown too large for expensive human interventions such as mass contraception which would, anyway, require approval from the Ministry of Environment.

Elephants are highly intelligent and complex creatures, he says. They’re not a species that lends itself to a lot of intervention.

“It’s not just about going in and removing animals, so even transfers are not necessarily a solution. Removal also impacts on their social interactions, even if it’s more socially acceptable than culling. Corridors and huge protected areas are definitely the way to go.”

“We humans are just fragmenting elephants’ habitats and disrupting their systems,” says Digs Pascoe. “We’ve got to recreate what they were originally able to do. The sooner corridors are opened up, the better. They’re really the only way.”