Parliament is struggling to get answers out of the North West province’s Department of Rural, Environmental and Agricultural Development about a suspicious “donation” of 130 buffalo, 50 white rhino, 50 sable and 32 nyala worth about R100 million to a company with ANC connections. The “donation” has destroyed provincial breeding programs. 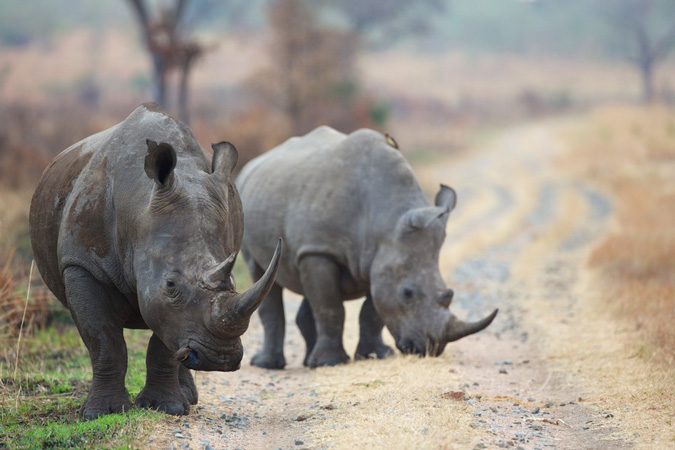 Member of the Provincial Executive Council (MEC) Manketse Tlhape promised to give Parliament’s Portfolio Committee on Environmental Affairs written submissions about several unclear aspects of a deal in which more than 250 game animals were donated to a company with political connections.

The deal is supposedly part of a government-driven empowerment scheme to give black farmers a toehold in the R20-billion-a-year game-breeding industry, with a donation of surplus stock from state game reserves but, according to a report in the Sunday Times in September 2015, Tlhape “put officials under intense pressure to pass the deal, despite their warning that it would deplete breeding stock to disastrous levels”.

The application for the R100-million game donation “just came in all of a sudden and we had to push it [through]”, one Parks official told the Sunday Times.

Thomas Hadebe, DA shadow minister for Environmental Affairs and a member of the Portfolio Committee, says, “In the November meeting, Jonathan Denga, the Department’s director for biodiversity management, reported that a team of scientists had given an assurance on animal viability by ensuring that species were not in a dangerous condition, but if you look at the most recent written submissions, it’s immediately obvious that this isn’t true. After the donations, there were only 11 buffalo bulls and no cows left in Molemane Park in North West, and there were 18 bulls and no cows left in Borakalalo Park, making it impossible to continue the breeding cycle. In Pilanesberg, meanwhile, there were no sable antelope left at all after the donation.”

The company that benefited from the game donation, Southern Africa Rare Game Breeders Holdings (SARGBH), was set up in July 2015 by controversial former Rustenburg mayor and ANC 2016 election coordinator Matthew Wolmarans, his former municipal manager Andries Boshoff, and businessman Mike de Kock, who’s believed to be a close friend of North West premier and provincial ANC chairperson Supra Mahumapelo. SARGBH looks set to make millions in profits from breeding and sales, a small stake of which will go to a workers’ trust. Some of the animals – reportedly, 31 sable, 25 buffalo and 29 nyala – have already been relocated to farms owned by De Kock, who is leasing the land to SARGBH.

According to the SARGBH website, sargbholdings.com, sable and nyala donated by the North West government are “the government’s contribution to the Wildlife Transformation Initiative”. This initiative – called additionally and variously, on the website, the Wildlife Industry Transformation Initiative and the Game Breeders Transformation Project – is, according to the same website, a North West government and private-sector joint venture, established between SARGBH, the North West Parks Board and the Department of Rural, Environmental and Agricultural Development. No details of stakeholder membership are provided. The project was officially launched in August 2015 by Supra Mahumapelo on a farm belonging to Mike de Kock.

Following a finding earlier this year by Parliament’s Portfolio Committee on Environmental Affairs that the North West Parks Board had not followed due process in donating the game, the Portfolio Committee asked the province’s Department of Rural, Environmental and Agricultural Development to attend a meeting on 18 October to answer some key questions. These included what the policy for game donations is, whether there had been any impact on the viability and the breeding potential of the remaining species after the donation had been made, and details of individuals who constituted the company that had benefited from the donation. But MEC Manketse Tlhape didn’t turn up at that meeting because, she said, the invitation had not reached the Department in time.

Tlhape subsequently submitted a letter of apology to the Portfolio Committee. The letter also contained information on the key questions but these answers were found to be lacking, and the Committee decided to “engage the Department in robust discussion” at a meeting held at the end of November and chaired by the ANC’s Philemon Mapulane. The discussion that followed revealed several contradictions and gaps in the wording, dates and signatures of the contract agreement between the North West Parks Board and SARGBH, as well as some problems with the way the Department had handled the donations.

Tlhape conceded that the game-donations project had not been carried out with due diligence, and that the Department had made “some errors”, including not fully complying with government prescripts in terms of the Public Finance Management Act (PFMA), but said that it had “learnt its lesson and was willing to do due diligence on the project, based on the Committee’s advice”. Tlhape was then given until Monday 12 December to clarify several issues in writing, including figures on mortality during movement of the animals, details of the species available in the various parks prior to and after the game donation, and the conservation health of the animals, and correspondence confirming that the North West Parks Board had informed the Provincial Treasury of the transaction, and that the MEC had approved the transaction through its accounting officer. It is these written submissions that are now coming under scrutiny and being found wanting.

Among several other “very worrying” issues, Hadebe notes that while the translocations of game took place between 1 July 2015 and 11 March 2016, an agreement for monitoring and evaluation of the donated game wasn’t approved until 30 March 2016. Additionally, “The Portfolio Committee asked the Department to show us SARGBH’s written application for the donations, and it isn’t included in the documents they sent to us,” Hadebe notes.

“It’s very clear from the written responses we’ve now received from the Department that there was glaring undue influence in this deal in order to benefit certain individuals, and there’s no doubt that the Department violated Section 24(b) of the Constitution, which charges it with the duty to protect the environment for present and future generations, and promote conservation,” Hadebe says.