Elephants Alive received the call at lunchtime on Tuesday, 16 February 2016. An elephant calf had become trapped in a dam at Phalaborwa Copper, Limpopo.

The Elephants Alive team raced into action and were soon on site. Inspection of the dam revealed numerous scuff marks from elephants trying to rescue the calf. Elephants form such strong family and maternal bonds that one can only imagine how distressed the baby, its mother and the herd must have been.

Wildlife Supervisor, Johann McDonald, and his team rescued the baby and loaded him onto a truck. They had tried in vain to reintroduce him to the breeding herds still in the vicinity but the little calf began looking weak and in need of rehydration. 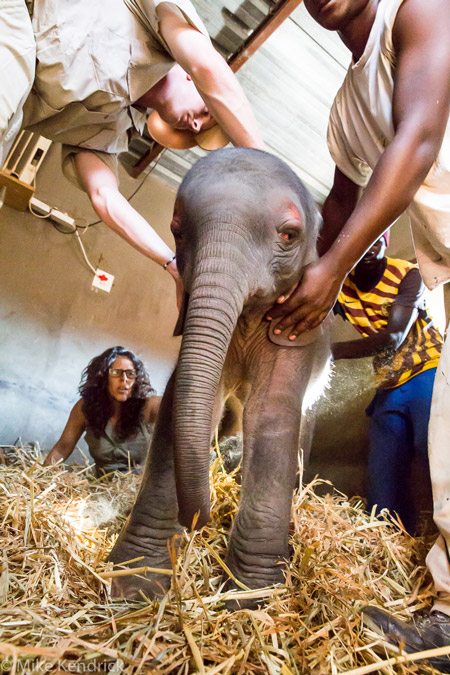 The calf was transferred to the Elephants Alive vehicle and doused with water to keep him cool and covered with wet blankets on a mattress. He was then transferred to a holding stable at a wildlife rehabilitation facility in Hoedspruit.

On arrival at the facility, the full extent of the trauma became clear. The distressed calf called repeatedly, vainly trying to locate its mother. Bruised areas over each eye were clearly visible, injuries incurred while trapped in the dam. With great care, the calf was unloaded and guided towards an open stable door. Once inside he continued to totter about and bellow, understandably disorientated.

The assembled team calmed him and he took some rehydration fluids from a bottle. Exhaustion flooded over him and he lay down while his team of wildlife vets set up a saline drip to further rehydrate him, and administered antibiotics. Elephant calves are notoriously difficult to rear as they require precise nutrients in their milk. 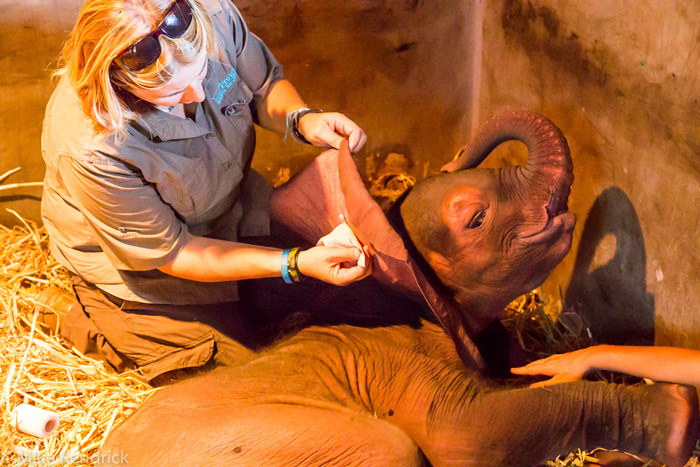 His future is by no means certain, but once again the Elephants Alive team have done all they can to support one of these incredible animals. They will be checking up on Amanzi (meaning water in isiZulu) regularly and they will be exploring potential sources of milk formula to assist in his much hoped for recovery.