You are at:Home»Recent News»10 elephants poisoned with cyanide in Zimbabwe

Nine adult elephants and one calf have been poisoned with cyanide around Zimbabwe’s largest wildlife area, the government’s Hwange National Park.

Four of the poisoned elephants died near the south of the Park and their tusks were taken. 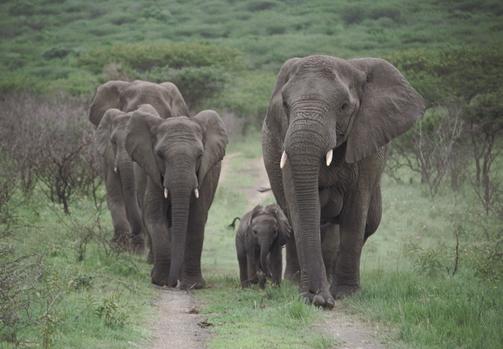 The others, including a mother and her calf were found in two areas further north and may have been poisoned last weekend and the poachers had not yet returned to hack out the tusks from the dead animals.

Trevor Lane from the Bhejane Trust, which monitors much wildlife activity in north western Zimbabwe, said early Tuesday that government rangers from the Parks and Wildlife Management Authority were following up.

”Parks went out there quickly and energetically and I am sure they will make progress and produce results as they are very determined. The poachers left buckets with cyanide mixed with salt which have been recovered. We know some vultures will have been poisoned as well, but we are not yet sure how many.

“We should expect more poaching this year because people are so poor in this bad economic situation.”

The first case of cyanide poisoning of elephants in Zimbabwe emerged in 2013 and about 100 corpses were found in the south of the park by hunters who took extensive photographs of the dead animals and then helped Parks and Wildlife Management Authority rangers follow up.

Several poachers were arrested and were sentenced up to ten years in jail.

“I am very sad to hear about this latest incident. We hoped the cyanide episodes were over,” said Gillies, a leading member of Zimbabwe’s wildlife community who is also an official counter of Zimabwe’s elephant population in the west of the country.

Cyanide is widely used in the gold industry in Zimbabwe where miners use cyanide concentrate to catalyze the separation of pure gold from bulk ores during the chemical purification process.

Cyanide kills the body’s cells by starving them of oxygen. In mammals, the poison is most harmful to the heart and brain—organs that depend heavily on oxygen supplies. Elephants appear to die no more then about 100 m from where they drank poisoned water or used salt licks drenched in cyanide.

Elephants, according to wildlife experts die most painful deaths from cyanide. There are tens of thousands of informal gold miners in Zimbabwe.