You are at:Home»Recent News»ANALYSIS: Lies, damned lies and rhino statistics

A 10% fall in poaching last year is not the good news it appears to be — especially considering SA plans to resume its horn trade, writes Tony Carnie 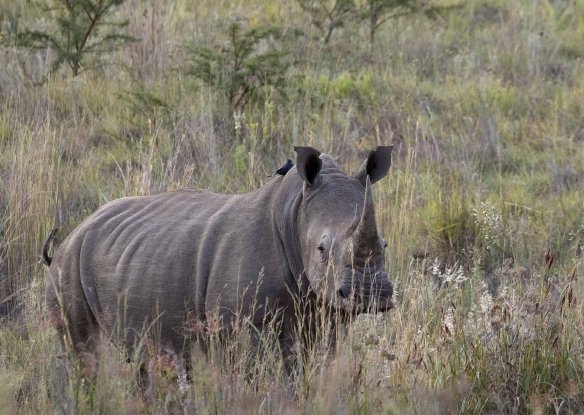 The latest 10% drop in the national rhino poaching statistics may sound like good news, but it masks the fact that the decade-long bloodbath has thinned out animal numbers so deeply that rhinos are no longer such easy meat for poachers.

Poachers now have to work that much harder to fill the order books for international crime cartels because the Kruger National Park rhino population has been hammered since 2008.

Also, the target has shifted away from the Kruger to KwaZulu-Natal, where there has been a staggering 38% increase in horn poaching over the past year.

Environmental Affairs Minister Edna Molewa announced on February 27 that 1,054 rhinos were killed for their horns nationwide during 2016 — compared with 1,175 in 2015.

But it still adds up to roughly three rhinos gunned down every 24 hours.

It is true, as Molewa noted, that rangers and anti-poaching units in the SA’s world-famous Kruger Park have upped their game to the point that rhino killings dropped by almost 20% (662 last year compared with 826 in 2015).

Yet is also clear that the total rhino population in Kruger has dropped. The latest census suggests there may be roughly 7,200 white rhinos left in Kruger, from about 8,800 in 2015.

It is quite plausible that the natural birth rate of Kruger rhinos has also been hit hard by several years of drought, but considering that the park’s white rhino population stood at more than 10,000 seven years ago, it is clear that numbers have now been thinned out significantly by the horn poachers.

What of KwaZulu-Natal, the cradle of global rhino conservation?

In the late 1800s, there were just 50 to 100 Southern white rhinos left in the world (all of them in the Imfolozi Game Reserve in KwaZulu-Natal). This tiny remnant population was multiplied steadily thanks to the conservation work of the former Natal Parks Board and game rangers like the late Dr Ian Player.

By 2008, when the continental rhino-killing spree really hit SA, the tiny remnant KwaZulu-Natal population had been used to restock Kruger and other parks and the national herd had grown to more than 20,000.

In stark contrast to the rest of Africa, SA was custodian to more than 90% of the global population of white rhino and about 35% of the continent’s black rhino population by 2013.

All this painstaking work continues to unravel.

Now the poachers have turned their rifle barrels, axes and machetes on the Hluhluwe-Imfolozi Park and other reserves in KwaZulu-Natal, killing at least 160 rhinos last year, compared with just 11 during 2011.

Compared with last year alone, the conservation group WWF-SA estimates that rhino poaching in KwaZulu-Natal shot up by 38% over the last year in the province that saved the white rhino species from almost certain extinction just over a century ago.

Earlier this month, Molewa’s department made a surprise announcement that SA – under legal pressure from private rhino breeders who now own roughly a third of the national herd – is planning to lift the eight-year-old moratorium on domestic rhino horn sales.

While the global trade in rhino horns has been banned since the late 1970s, SA still allowed rhino horns to be sold on the domestic market for decades. This came to an end in 2009.

This also appears to be a tacit acknowledgment that several private rhino ranchers were deeply involved in supplying the illegal global rhino horn trade until at least 2009.

Opponents of a legal trade in rhino horn argue that SA is not in any position to prevent illegal or poached horns being laundered into the proposed legal trade. They believe that lifting the moratorium now will reopen, and possibly exacerbate, the illegal global trade.

In her briefing statement on Monday, Molewa sent out further mixed messages on SA’s stance on reopening the trade.

On one hand, she asserted that the 2009 moratorium was “a rational and reasonable measure that contributed positively to the conservation and protection of the rhino in SA”.

But why would anyone want to buy a rhino horn on the domestic market today when it remains illegal to sell this commodity beyond our borders?