Residents at a well-known Namibian tourist lodge on the banks of the Okavango River had to watch helplessly as a horrific slaughter of elephants played out in front of their eyes just across the border in Angola. At least five men armed with AK-47 automatic assault rifles attacked a group of about 40 elephants grazing peacefully in the long grass along the river.

According to Hennie Burger, who saw the horrific attack less than 150 metres from where he was standing, “The men suddenly appeared out of the bushes on the Angolan side of the river. They started firing at the animals with the assault rifles set to full automatic and what ensued could only be described as tragic carnage. At least three elephants were mortally wounded and the noise they made was horrifying.”

Because the calibre of the AK-47 automatic assault rifles is too small to kill an elephant effectively and humanely with one shot, many hundreds of rounds are needed to bring down an animal of that size. Remnants of the Angolan civil war, including hand grenades and improvised explosives, were used along with AK-47 automatic assault rifles to massacre at least three elephants in the Luiana National Park, previously the heartland of Jonas Savimbi’s UNITA, on the banks of the Okavango River.

According to Burger the attack did not focus on one or two of the animals. He said the barbaric men were firing wildly and indiscriminately, leaving many other elephants wounded. Those who could still move disappeared into the bushes and have not been seen since. “At this stage it is not clear how many of the elephants were actually injured. We just know that three suffered a torturous death and that the attackers came in the night to hack out the tusks of the biggest animal out of its skull with axes and machetes,” he said.

According to a well-known lodge owner of the area, members of the local communities said that they heard explosions along with automatic rifle fire when the incident took place. “From what I could discern from the stories of the villagers, the gang of poachers might have used hand grenades or improvised mortars or some such explosives in their attack on the herd of elephants grazing peacefully in the long grass on the banks of the river. I was told that the people heard the awful noise of the attack and screams of anguish of the elephants shortly afterwards. It must have been awful,” the owner told Informanté.

On the Namibian side, officials from Nature Conservation started patrolling the Namibian banks of the river to look for more dead animals that might have succumbed to the bullet strafing delivered so indiscriminately.

In the meantime, local lodge owners and the Namibian authorities started crossing the river to assist their Angolan counterparts in investigating the massacre. Namibians helping to facilitate the transport of police and environment officials have asked that their names not be used out of fear of retribution from the poachers. “It is not the first time such an attack happened here, right in the middle of the Luiana National Park. A few months ago there was an international fishing competition and a lot of people were on the river in their boats. They had to flee from the fishing spot while AK-47 bullets were flying over their heads because the poachers attacked and killed a hippopotamus on the river bank close to them,” one of them said. 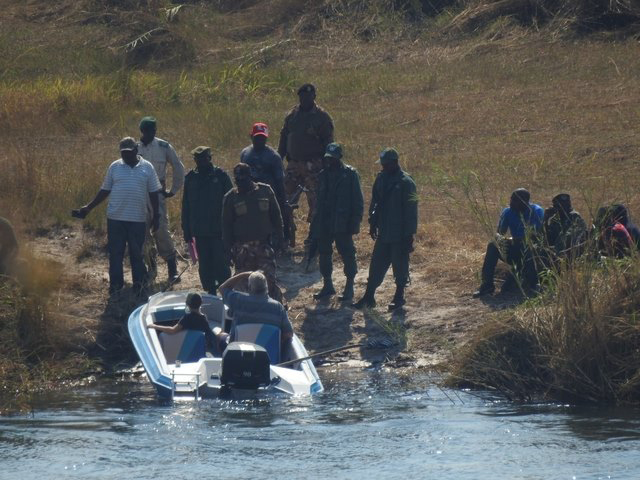 Another resident of the area on the Namibian side of the river, Mark Paxton, said the huge animals only started returning to the area in 1997 after the Angolan civil war ended. “The area where the elephants were attacked was declared a conservation park but the Angolans do not apply the same value to wildlife and its economic benefits to the community as the Namibians. Crocodiles and hippopotami on many occasions get slaughtered in this indiscriminate manner and it seems that Angolan wildlife officials worry more about the meat they might get from such actions than the actual conservation of natural resources.”

Later, many villagers on the Angolan side of the river could be seen walking back to their dwellings in the bush with hunks of meat. 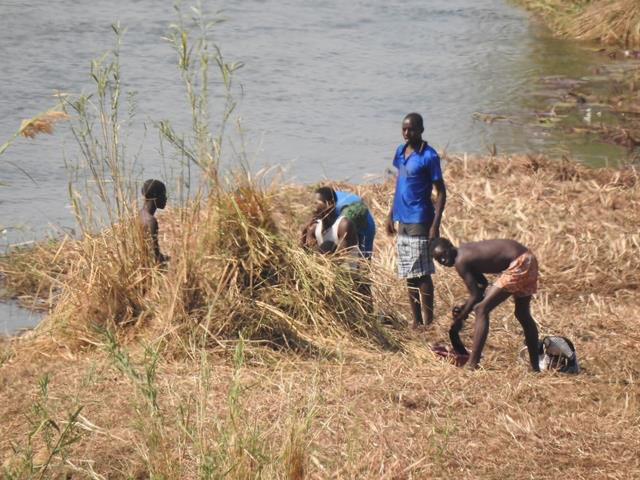 The barbaric attack on the group of elephants occurred on Saturday afternoon near Kasira Camp close to Derico in the Katere area of the Kavango.