You are at:Home»Recent News»China’s ivory trade ban: how to make it work 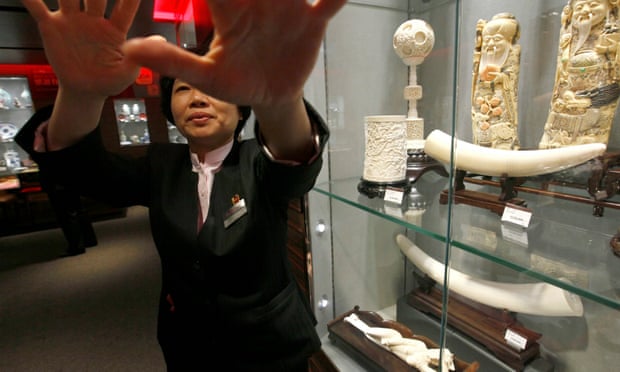 A saleswoman tries to stop a photograph being taken of ivory items for sale in a department store in Hong Kong. Ivory traffickers operate under the cover of the “legal” trade in China and Hong Kong. Photograph: Alex Hofford/EPA

China’s decision to ban all trade in ivory by the end of the year has been widely hailed as a game changer by environmentalists in China itself and across the world. There is no doubt that this is very welcome news.

Many commentators have also pointed out that this new Chinese policy is also motivated by self-interest. China has rapidly growing economic and political interests in Africa and hopes to improve its image on the continent by responding to pressure from its African allies to reduce demand for ivory among Chinese consumers. If protecting elephants is in China’s self-interest—and if African leaders care enough about them to put pressure on China to change its policies—that is also welcome news.

Nevertheless, as someone who has long campaigned for China to shut down its ivory market, I can’t help worrying that this will prove a hollow victory: a case of too little, too late.

It is already too late for the 150,000 elephants estimated to have been killed by poachers in Africa since 2012, when the scale of the current crisis was already plain for all to see. No one doubts that China was the principal destination for the ivory from this slaughter.

Across Africa, it is no secret that the increasing number of Chinese workers, tourists, trade delegations and diplomats in Africa have provided a lucrative market for local criminals engaged in the ivory trade. For many, a visit to Africa is seen as an opportunity to acquire a suitcase of ivory bangles or a tusk to take home as a nest egg. Others have colluded with corrupt local officials to smuggle out much larger amounts of ivory. Until recently, the Chinese authorities have vehemently denied any responsibility for the role of China in the elephant slaughter, and even intervened to disrupt law enforcement proceedings against Chinese nationals.

Even more seriously, negligence and inaction by Chinese and other world leaders in the past four years have allowed international crime cartels to take control of the ivory trade. The cartels have used this time to set up infrastructure, supply chains to markets in China and neighbouring countries, financial instruments for money laundering, and contacts with corrupt politicians and law enforcement personnel in China and Africa.

These are all elements of a system, that is now fully operational, for efficiently—and profitably—moving ivory from the killings field in Africa to Chinese consumers.

We know very little about who these criminals are or the details of their operations. Studies have focused on specific elements of the systems that are relatively visible: such as the impact of poaching on the ground, the availability of ivory products for sale in retail outlets in Hong Kong and mainland China, and the presence of Chinese buyers in ivory markets in neighbouring countries such as Vietnam and Laos. But these are just fragments of a complex criminal enterprise that remains largely unknown.

The little we do know about the illegal ivory trade is cause for serious concern. We know it is a multinational enterprise, with branches in the Middle East and other Far East countries, operating under the protection of corrupt politicians and officials. It is well-placed to neutralise, sidestep or subvert piecemeal law enforcement measures.

Most worryingly, it seems clear that the ivory cartels are in reality “multi-product enterprises” for whom ivory is just one of a basket of illegal trading activities, alongside drugs, arms or people for example. This diversification makes them more resistant to attempts to shut down any one sector of their operations. Since they have already invested in setting up an ivory “product line”, they have an incentive to keep it going. Making the ivory trade a bit more illegal than it already is won’t stop them. They are experts in illegal trade: it’s their job.

We don’t yet know in detail what the Chinese authorities propose to do, but given the rapid growth of ivory trafficking across Asia, just closing down the existing legal trade in China will not be enough to save elephants.

A major intelligence gathering and law enforcement effort is required, targeting the ivory traffickers that have been operating under the cover of the legal trade. Organised crime will not go away but decisive action can send the message to the traffickers that ivory smuggling is not worth the risk:

1. Identify the source and age of ivory in markets and homes across Asia. Carbon 14 dating has been successfully used to determine the age of ivory, that is, the date that the elephant it comes from died. If Chinese authorities are serious about disentangling the legal and illegal trade, they should use this technique to examine supposedly “legal” pieces of ivory on sale in retail outlets. Since the last legal sale of ivory from African stockpiles took place in 2009, any ivory that is younger than this is, by definition, illegal. This will expose all involved in illegal trade. By combining this with DNA testing to trace the origins of ivory to a specific region or population of elephants, we can map supply chains.

2. Get serious about law enforcement. Employ bilateral mutual legal assistance agreements and use results of DNA and isotope ageing to pursue investigations, arrests and prosecutions of members of multinational criminal networks active in China, Africa and elsewhere

3. Conduct a massive media campaign to demonstrate the extent of criminal involvement in the ivory trade to the Chinese public. This will not only win public support for actions that combat poaching elephants and trafficking of ivory but also help reduce demand for ivory in China—and Chinese communities overseas—by associating the purchase of ivory with criminality and corruption. Chinese leaders and particularly President Xi Jinping have much more influence over consumer behaviour than politicians in western countries. They have it in the power to stigmatise the purchase of ivory among the vast majority of law-abiding consumers—so that owning ivory becomes a source of shame, rather than a status symbol.

This is the chance for China’s leaders to demonstrate they are serious about ending the ivory trade and to make up for the delay in changing policy which has been so devastating. Amplifying the effect of the ban on ivory trade in this way could not only save elephants, but also set a precedent for China’s new leadership in the conservation of endangered species.