You are at:Home»Recent News»Conservationists and MPs call for a total UK ban on ivory sales 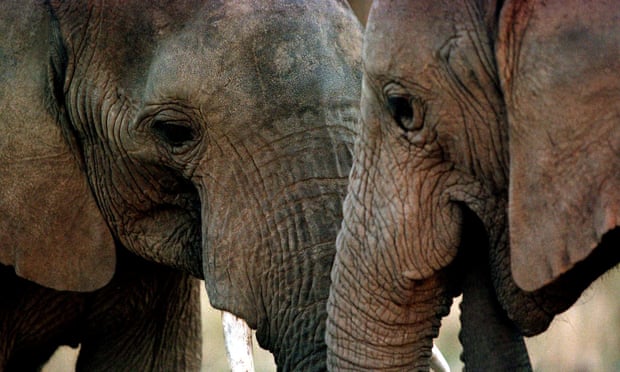 An elephant is killed every 15 minutes on average due to the poaching crisis. Photograph: Mike Hutchings/Reuters

The government must implement a total ban on ivory sales in the UK, according to scores of politicians, conservationists, scientists and entertainment stars including William Hague, Jane Goodall, Stephen Hawking and Ricky Gervais.

Ministers this week announced a ban on ivory younger than 70 years old, but stopped short of a total ban.

The group have written to prime minister Theresa May “appealing to the government for a total ban on ivory sales”, which was a pledge made in both the 2010 and 2015 Conservative party manifestos.

Elephants are being slaughtered by poachers for their ivory in huge numbers and, while the international trade is illegal, critics say legal domestic trade allows illicit ivory to be passed off as antique and therefore legitimate. “The legal ivory trade in the UK feeds one of the largest markets for ivory in Europe,” write the group. “The closure of all ivory markets, both international and domestic, is critical for elephants’ survival.”

Over 140,000 of Africa’s savannah elephants were killed between 2007 and 2014, wiping out almost a third of their population, according to a major survey published in August. Just 350,000 remain, with poaching continuing today and an elephant being killed every 15 minutes on average.

The letter’s signatories include Richard Leakey, Joaquin Phoenix, Tim Farron, Caroline Lucas, Ed Miliband and Richard Dawkins, plus 19 more MPs from across the parties. The letter was coordinated by Action for Elephants UK before the government announced its ban on modern ivory sales and ahead of protest marches in the UK and around the world on Saturday.

In an addendum to the letter, Maria Mossman from Action for Elephants UK, said: “The crackdown on ivory sales announced by the government does not represent the total ban we are calling for. It simply tightens controls on the documentation of ivory for sale, however no mechanisms could ever ensure that such controls were met and enforced for every single piece of ivory sold in the UK. As long as a legal ivory trade is allowed to continue, illegal ivory will find its way on to the market – and the scourge of poaching will continue.”

“We are dismayed that the government has chosen this route rather than announcing a complete ban and demonstrating the kind of leadership so urgently needed for a global ban on ivory,” she said.
Environment secretary, Andrea Leadsom, who announced the ban on UK sales of post-1947 ivory items, said on Wednesday: “Elephants are some of our world’s most iconic animals and it will take truly global action to stop the insidious criminals who selfishly prosper from the ivory trade. This [UK] ban will send the message that the ivory trade is a thing of the past.” It was already illegal in the UK to trade in raw tusks or unworked ivory of any age.

A coalition of conservation groups, including the Zoological Society of London (ZSL), Tusk, Environmental Investigation Agency, Wildlife Conservation Society and WildAid, have also criticised the new restrictions on the UK ivory trade as inadequate.

“The announcement is welcome but falls short of what is needed,” said the groups in a joint statement. “By focusing on ‘modern day ivory’, the government has overlooked the huge problem of worked ivory dated prior to 1947, which makes up the vast majority of the market. The government must recognise that a near-total ban would be the most effective step the UK can take to protect the future of elephants. Failure to do so will mean the UK neither meets its international commitments nor represents public opinion.”

“Maintaining domestic ivory markets helps fuel the illegal killing of thousands of elephants,” said Prof Jonathan Baillie, director of conservation programmes at the ZSL. The US implemented a ban on ivory sales in July, following France’s in April, while China, the major market for ivory, has imposed a three-year ban on ivory imports.

In a statement to be read at Saturday’s marches, the foreign secretary Boris Johnson, said: “The elephant is perhaps the single greatest glory of the animal kingdom. It is utterly heartbreaking that their numbers are falling so far and so fast. We must act and that means an ivory ban, as we Conservatives promised in our manifesto at the last election.”

A global summit on the international trade in endangered species (Cites) begins in South Africa on Saturday, where 182 nations will debate proposals to either loosen controls on ivory sales or tighten them.

Environment minister Thérèse Coffey, who represents the UK at the Cites summit, said: “Working with other governments, I want to see strong outcomes from this conference to protect our precious global wildlife, including elephants, lions and rhinos.”

The EU is set to oppose a total global ban on ivory sales. Johnson, who backed the UK leaving the EU, said: “It is dismaying that the EU finds itself unable to unite on this question and therefore unable to speak up properly in Cites. By taking back control of our conservation strategy we in Britain will once again be able to show a global lead.”