You are at:Home»Recent News»Grauer’s Gorillas May Soon Be Extinct, Conservationists Say

The Grauer’s gorilla, the world’s largest primate, has been a source of continual worry for conservationists for more than two decades. Longstanding conflict in the deep jungles of the eastern Democratic Republic of Congo left experts with no choice but to guess at how that gorilla subspecies may be faring.

Now, with tensions abating somewhat, researchers finally have an updated gorilla head count — one that confirms their fears. According to findings compiled by an international team of conservationists, Grauer’s gorilla populations have plummeted 77 percent over the last 20 years, with fewer than 3,800 of the animals remaining.

“We suspected that the Grauer’s gorilla had declined because of all the insecurity in the region, but no one had an idea of how much they’d declined by,” said Andrew Plumptre, director of the Wildlife Conservation Society’s Albertine Rift Program in Central and Eastern Africa. “It turns out that the rate of collapse pushes this subspecies to the verge of extinction.”

Grauer’s gorillas — named after Rudolf Grauer, an Austrian explorer and zoologist who first recognized the apes as a separate subspecies — resemble their close relative, the mountain gorilla, save for their longer limbs and shorter hair. Although Grauer’s and mountain gorilla populations were once connected, years of isolation have left them genetically distinct enough to warrant separate designations as eastern gorilla subspecies.

In 1994, the Wildlife Conservation Society conducted surveys in and around Kahuzi-Biega National Park, in what was then eastern Zaire. Researchers estimated that 17,000 Grauer’s gorillas remained. But the Rwandan genocide that year led to the gorillas’ precipitous decline.

An estimated 800,000 Rwandans were killed over a three-month period, while hundreds of thousands more fled to neighboring Zaire. Some of those refugees formed militias such as the Democratic Forces for the Liberation of Rwanda, and the forest served as their stronghold and hide-out.

Instability soon spread, leading to the overthrow of President Mobutu Sese Sekoand civil war in the newly formed Democratic Republic of Congo. From 1996 to 2003, that conflict cost the lives of an estimated five million people, and also brought the formation of more armed groups, 69 of which continue to operate in the eastern part of the country.

Bushmeat feeds many of them, and gorillas, which can weigh up to 400 pounds, prove easy and worthwhile targets. To finance their efforts, many armed groups have also set up artisanal mining sites, nearly all illegal.

The International Peace Information Service, an independent research institute based in Belgium, has documented more than 1,000 of these mines, and the Wildlife Conservation Society has counted at least 240 more within protected areas and proposed protected areas. The mines attract untold numbers of outside workers, who also need to eat.

Although the fighting has ebbed somewhat over the last five years, the region today is by no means secure for people or for animals. Eastern Congo “is just tragic on every level imaginable,” said Liz Williamson, a primatologist at the University of Stirling in Scotland. “People there have been living through hell for 20 years.”

Those trying to protect the region’s flora and fauna are equally at risk. The Wildlife Conservation Society estimates that 170 to 200 park rangers have been killed in eastern Congo since 1996. 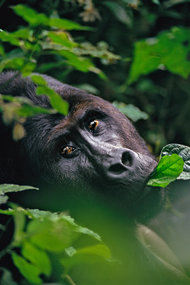 “The government has been trying to go into some areas to disarm all these groups, but it’s not an easy job,” Dr. Plumptre said. “In that large of a chunk of forest, finding people is difficult.”

Despite the danger, over the last few years, field teams of local residents, park staff members and scientists have managed to undertake the most comprehensive survey of Grauer’s gorillas ever, covering 7,450 miles of their range. Statistical analyses allowed Dr. Plumptre and his colleagues to estimate a total remaining population of fewer than 3,800.

All told, the researchers calculated a 77 percent decline in Grauer’s gorilla populations since 1994, although some sites were hit harder than others. In and around Kahuzi-Biega National Park, for example, there has been an 87 percent decline.

Additionally, nearly 80 percent of the total losses took place over just one generation — a rate three times higher than what is normally needed to officially declare an animal on the brink of extinction. Should this trend continue, most Grauer’s gorillas will be gone within the next five to 10 years, Dr. Plumptre said.

Grauer’s gorillas are listed as endangered by the International Union for Conservation of Nature, but Dr. Plumptre and his colleagues believe that their situation warrants immediate updating to critically endangered status. Dr. Williamson submitted evidence this month supporting that change, and she expects approval by June.

While killing gorillas is already illegal in the country, declaring the subspecies as critically endangered would probably bring more funding and support for saving it. Protecting the entirety of the gorilla’s 7,700-square-mile territory would no doubt prove impossible, but Dr. Plumptre and his colleagues are talking with the government and community leaders about establishing two new protected areas that would encompass 60 percent of the remaining gorillas’ habitat.

“I think people felt like this was a lost cause and not much could be done,” Dr. Williamson said. “But now W.C.S. is really pushing to get boots on the ground and create these new national parks, which would really make a difference.”

Government commitment to saving the gorillas, she added, is essential.

There is some evidence that heightened protection and investment could work. In their surveys, the researchers found that one gorilla population, in the highland sector of Kahuzi-Biega National Park, has increased to an estimated 200 from about 130 in 2000. That sector receives the most protection in the eastern national parks, and even welcomes tourists.

“This shows that if you do invest in a site, you can stop the decline,” Dr. Plumptre said.

The researchers also plan to set up microcredit schemes — small loans with minimal interest that are intended to help people living in poverty set up businesses — and employment opportunities for people from local communities who are involved in mining. Additionally, they hope to establish a certification program for legitimate mining sites.

Some Western companies like Motorola, Nokia, BlackBerry, HP and Intel already work with a group called Solutions for Hope to acquire conflict-free minerals. Dr. Plumptre imagines updating the conflict-free mineral listing to include a “bushmeat-free” or “conservation-friendly” validation.

“If people started lobbying for gorilla-friendly cellphones and iPads, it would force the government of D.R.C. to take this more seriously,” he said.

Radar Nishuli, the director of Kahuzi-Biega National Park, agreed that more engagement from people outside the Democratic Republic of Congo was needed. “All of the world needs to support our efforts to save what’s still left of the gorillas and their forest habitat, and to help the Congo get out of this war situation,” Dr. Nishuli said.

“I am optimistic that gorillas can still multiply, to the delight of all,” he added. “If I wasn’t, I would have already given up this fight.”