You are at:Home»Recent News»One Of Africa’s Biggest Elephants Was Just Killed By Trophy Hunters

The recent killing of a massive bull elephant in Zimbabwe — some say one of the largest elephants hunted in Africa in decades — has enraged wildlife conservationists and animal advocates alike, igniting another round of Cecil-like conversation about trophy hunting, ethics and how to protect the world’s most iconic species.

The slaughter of the elephant — whose tusks weighed over 100 pounds each — has been highlighted in a number of news outlets, including the Telegraph and Africa Geographic, but the facts surrounding the hunt continue to emerge.

Most likely, the tusker (general term for a male elephant with large tusks) was killed on October 8 in a hunting area bordering the southern end of Zimbabwe’s Gonarezhou National Park, which means “The Place of Many Elephants.”

But despite the tragic loss, “there is no foul play so to speak,” Anthony Kaschula, a Zimbabwean photographic safari operator who is not anti-hunting, told The Dodo. “There was nothing illegal with this hunt. [But] just because it is legal to kill these incredible animals, is it right?”

The magnificent elephant was estimated to be in his 50s, according to Michelle Henley, principal researcher with South Africa’s conservation organisation Elephants Alive. By most accounts, the elephant’s tusks weighed about 120 and 122 pounds each, an astonishing figure by today’s standards.

“In Zambezi Valley [Zimbabwe], you would be extremely lucky to see an elephant of 60 pounds,” Kaschula says. “Of those, they would probably be maybe a dozen. But anything above that not very likely. Any elephant that is 100 pounds or upward in the entire Zambezi Valley? The chances of that are zero.”

The Telegraph reports that a German hunter paid over $60,000 to kill the animal, though there have been rumors that the hunter may have been a Mexican citizen or another nationality.

Hunting forums, including The Accurate Reloading, suggest the professional hunting guide is Nixon Dzingai, though that could not be verified by The Dodo. Efforts to reach Dzingai were not successful.

The recent killing came as a tremendous and distressing shock to many conservationists. “In all of my years of guiding, I’ve never seen an elephant of this size,” says Kaschula. “And you can speak to a generation or two above me who would say the same.”

“What I’m trying to put into perspective is in the 10 years I’ve been operating in Gonarezhou, there was only one elephant near to that size. He was shot in September 2013,” he adds.

Initially, a number of conservationists speculated that the tusker was a mighty elephant named Nkombo from Kruger National Park in South Africa. 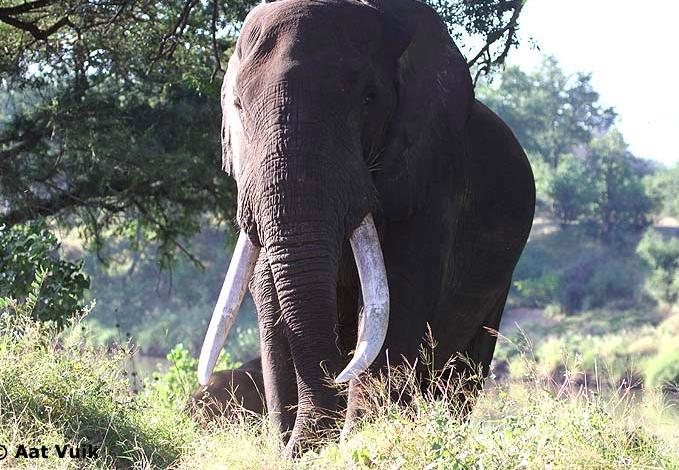 Aat VuikBut some disagree with this idea, including Aat Vuik, who manages a website called Tuskers of Africa. Vuik launched the site as a passion: an effort to compile in one place a database of the “great” tuskers, especially inside Kruger. (Henley defines a “great tusker” as a bull with tusks over 100 pounds and about 5 feet in length.)

In his estimation, Vuik says, the bull shot in Zimbabwe is not Nkombo: “The dead bull in the photos is not known to me. I have no pictures of him in my database.” Furthermore, Vuik thinks the bull “was living in Zimbabwe or may be from Mozambique. I have no indication at all this bull is from Kruger National Park.”

Henley agrees it wasn’t Nkombo. She says the tusk size is larger on the dead bull, and that the hunted animal appears older than Nkombo, who is likely in his 40s. She adds that data suggests Nkombo never moved out of the northern region of Kruger Park — though she does acknowledge that the dead elephant could have come from Kruger.

“Sound conservation practices within Kruger have meant that they still have some of the remaining large tuskers left in Africa,” she says. “However, lack of stringent hunting protocols when these animals leave our national parks make them extremely vulnerable.”

Meanwhile, Vuik says “the killing of every big tusker is a tragedy.”

Due to genetics, the offspring of big tuskers, he explains, have a greater chance of developing into big tuskers themselves.

Unfortunately, he says, “most of the midsized and big tuskers have been shot or poached. No big tuskers. No genes. No next generation of tuskers.”

Some measures have been taken to protect the last great tuskers. The Tsavo Trust, for example, has a program specifically to save the remaining 12 great tuskers in the Tsavo region in Kenya, called The Big Tusker Project.

Another example, although from way back when, is Ahmed, a majestic tusker who lived in Kenya in the 1960s and 1970s. As John Heminway, the chairman for WildlifeDirect, wrote in a 2014 opinion piece in National Geographic, soon after the murder of Satao, another great tusker, “Legends surrounded Ahmed. One was that his tusks were so long that he could go up a hill only by walking backwards. No one ever proved this tall tale, but images were taken of him resting his head on his tusks.”

In 1970, Ahmed was featured in a number of films, and after a campaign for his protection, Kenya’s president Jomo Kenyatta declared him a living monument. Ahmed ultimately had five armed game rangers protecting him around the clock.

Kaschula says that the tuskers in Zimbabwe have nothing of this sort of protection, but he is trying to encourage some kind of safekeeping for these remaining, matchless pachyderms. His idea: a total ban on hunting the tuskers who possess ivory past a certain size.

“What makes the most logical sense is that I want to put a maximum limit on the ivory that can be sport hunted across the country,” he says. “We aren’t trying to stop hunting. All we want to say is that the controls in place aren’t good enough to protect these animals. These are iconic animals. These are national treasures. They shouldn’t be just shot like any animal.”

“We have collectively failed to address the issue, which is to really give these animals the true value that they have,” he adds.

A hunter’s point of view

The vast majority of hunters on the Accurate Reloading forums rejoiced in the recent killing of the great tusker:

“Great hunt! Yes, magnificent animal, but he’s undoubtedly done what he needed to do for the gene pool and I’d rather see this ivory in Germany than being marketed by ISIL after some poacher poisoned him,” wrote one hunter.

“I share some of the thoughts about it being too much of a magnificent animal to shoot, but with the little knowledge I have about elephants I can tell it was a really old bull, with all that hanging skin, sunken temples and protruding spine, likely in its last years so definitely past its prime with a good chance to spread its genes and with a much clean quicker death that would have been to starve to death.”

What can be done

Conservationists like Henley think that the remaining “great” African tuskers — no more than 50 of them across the entire continent, she estimates — should in fact be protected by law similar to the protections given to Ahmed.

“Trophy hunting such animals shows a similar form of disrespect for not only the animal but other people’s enjoyment of viewing such majestic creatures,” she says. “It is a true privilege in today’s day and age. Would any well-educated person consider walking up to the Mona Lisa and scratching their name on it? Surely not: Precious works of art are there for all to enjoy and appreciate.”

These large tuskers, she says, “have been conserved with blood, sweat and tears for the enjoyment of all people that appreciate beauty. No one person should be permitted to ‘bag’ such an animal as theirs.”

The great tuskers, she says, are “living museums of bygone eras.”

In the meantime, the search is still on to find out who the tusker is. One clue may be found in a post in a forum called 4×4 Community. Photographer Graham Dyer wrote he had visited Gonarezhou late last month. He describes his visit below:

Dyer’s post end with a photograph of the bull, which looks — from this amateur’s eyes — much like the awe-inspiring tusker shot dead for his two front teeth: 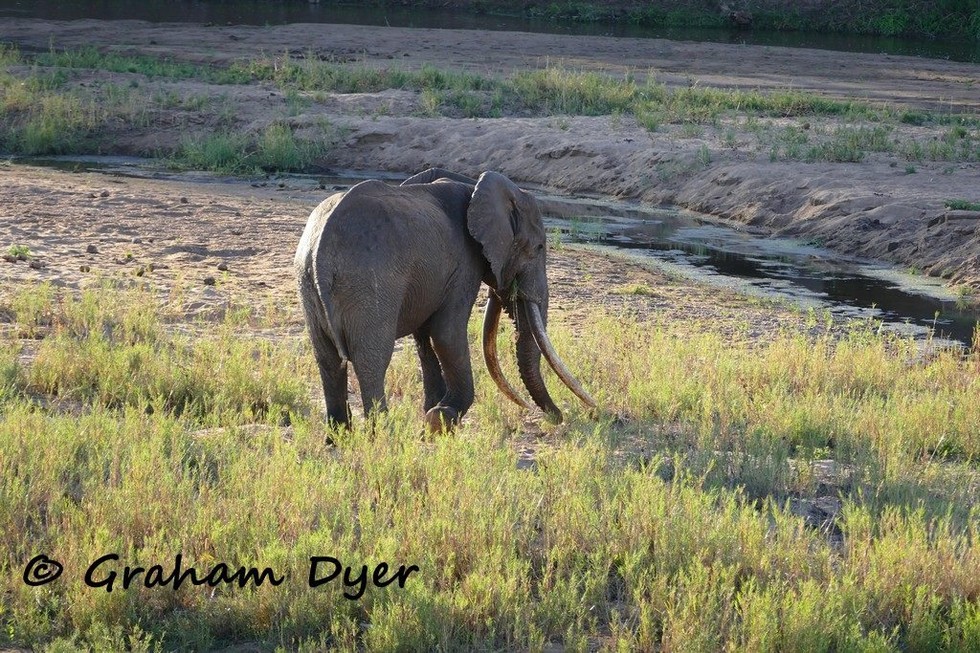